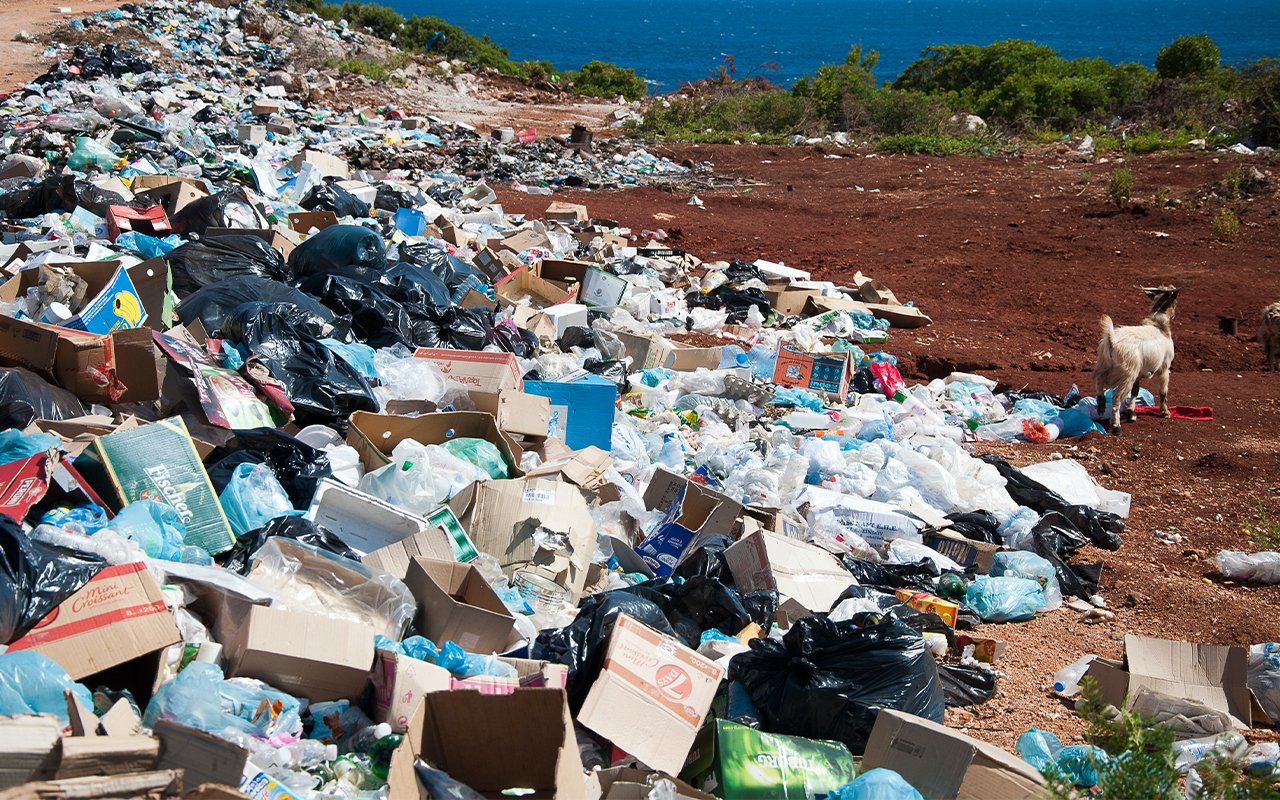 The city of Kigali generates about 600 tons of Municipal Solid Waste per day, which is projected to grow over time as the country undergoes significant economic transformation to become a lower middle income country.

Currently the city of Kigali is struggling with its Solid Waste Management (SWM) system because of its limited waste minimization and recovery initiatives. The solid waste collected from households and commercial entities including markets, hotels and restaurants in the city mainly consists of 70% organic waste, and only 10% to 12% of the total waste collected is recycled while the rest is dumped at Nduba landfill.

The dumpsite, is a non-sanitary tip that was set to operate temporarily for two years after closure of Nyanza landfill but has been in use for over 7 years with no environmental impact assessment (EIA) ever conducted on it. It is marred with spontaneous methane gas explosions, leachate flowing to nearby communities, unpleasant smells and the existence of vermin, a clear indicator of poor management. Often the landfill is overwhelmed with both solid and liquid waste. On a daily basis it receives between 500-600 tons of solid waste collected across the entire city of Kigali and around 150 to 200 m3 per day of faecal sludge which is disposed of in the ponds located in the area.

Evidence of substantial waste beneficiation between the point of collection and the point of disposal is scarce; and with the landfill management deficiencies, the system poses environmental and health risks to the city and its residents. The waste collection companies which are licensed by Rwanda Utilities and Regulatory Authority (RURA) to collect and dispose of the waste lack the financial muscle to transform the waste into energy/animal feed through composition or aerobic digestion.

A handful of them have channeled their extra resources towards waste recycling from the plastic and paper which makes 5% and 6% of the generated waste. Coopérative Pour La Conservation De L’Environement (COOCEN), a cooperative working with about 4,000 households in converting organic waste into briquettes for industrial consumption has not been able to scale its operations because of the high cost of producing the briquettes.

It costs the City of Kigali about RWF 600 million to manage the Nduba landfill and it only recoups about 12% of that amount from fees that the collection companies pay for their trucks to access the landfill.

From the foregoing, it is evident that SWM system in Rwanda needs some major reforms; which can be realized through Public Private Partnerships (PPP) among the waste collecting companies, City of Kigali authority and private investors to jumpstart the process. Waiting for a radical structural transformation and financial allocations from the government, might take a long while before the implementation kicks in.

The City of Kigali can follow in the footsteps of Kenya and South Africa to tap into SWM alternatives that are highly profitable, sustainable, efficient and promoters of the green economy.

The growing demand for meat and fish worldwide has driven up the demand for animal feed used by livestock farmers to grow chickens (poultry), fish and pigs feed which has an estimated turnover of nearly $400 billion every year.

Globally, on average farmers spend between 45% to 75% of their total costs on animal feed alone each year. Poultry feed accounts for the largest share of animal feed production at 43% because of the rise in the demand for primary poultry products (meat and eggs) followed by pig 27% and dairy 11%. The aquaculture feed contributes 4% to the overall animal feed production globally according to the Food and Agriculture Organization (FAO).

Despite Africa’s huge demand for animal feed, it produces less than one percent of global animal feed output. In 2017, South Africa represented the continent in contributing only about 11.1 million tons of animal feed to the world animal feed production compared to the market leader China, which contributed 186.9 million tons followed by USA, Brazil and Russia. There is a need to ignite the growth of the animal feeds market using locally produced solutions in Africa to meet the continental and global demand.

With a population of about 1.3 billion people that is growing fast, Africa will always have more mouths to feed and agriculture (especially livestock farming) is gradually becoming the booming industry that will help the protein deficit in Africa. Meat and fish are the most common animal proteins in African diets and with a rise in the population’s disposable incomes their demand is expected to go up significantly. According to Livestock Data Innovation in Africa, by 2050, the demand for livestock in the continent will grow faster than in other regions of the world; with the consumption of beef and poultry estimated to reach a market size of 13.6 million tons and 11.8 million tons respectively. On the other hand, the market sizes for egg and pork will grow to about about 6.1 and 3.5 million tons respectively. Average fish consumption per person in the Eastern Africa region is projected to increase from 4.80 kg in 2013 to 5.49 kg by 2022.

This growing livestock market has in turn created a huge demand for animal feeds. For poultry and livestock farmers to grow their chickens, fish and pigs to meet the standard market weight; they need to incorporate proteins (about 40%) in their animal feeds to help in building and repairing their body tissues.

For decades, proteins in animal feed have come from two main sources: soybeans (44% – 47%) and fishmeal (63% – 68%) which over time have become pricey and unstainable. The innovative approach of breeding Black Soldier Fly Larvae (BSFL) from organic waste and faecal matter as a sustainable and cheaper alternative of proteins (60%) for animal feed is helping farmers save up to 15% of the total costs of buying soymeal or fishmeal.

Agri-protein, a South African based company saw the opportunity to fill the gap by raising black soldier fly larvae (BSFL) for use in agriculture and aquaculture. It is the world’s largest fly farm and houses roughly 8.5 billion flies that produce more than 20,000 kilograms of BSFL every day. The BSFL are very rich in proteins and contain a wide range of amino acids and minerals that provide the necessary nutrition for livestock growth.

ions of flies on their farm to mate, lay eggs and produce larvae. The larvae are fed over 100 tons of organic waste every day which includes leftover and uneaten food from restaurants and hotels, blood and waste from abattoirs and animal manure. When fed on organic waste material, they produce a nutrient-rich fertilizer in the process before being harvested and dried into a natural and sustainable animal feed.

AgriProtein’s BSFL-based animal feed is more than 15 percent cheaper than other alternatives; soybeans & fish meal and has been proven to be highly nutritious for livestock, especially chickens (poultry), fish and pigs.

The case of Sanergy in Kenya: Transforming faecal waste into animal feeds

Currently, 60 million new residents move to urban areas every year. 25% live in slums, amounting to 1 billion people with inadequate housing and limited access to basic services, such as sanitation which are expensive.

With the high cost of sanitation in Kenya, Sanergy steps in to provide non-sewered sanitation solutions that serve all urban residents and are five times cheaper than sewers. The company builds affordable sanitation products designed specifically for urban slums, and franchises them to community members to serve all residents. Sanergy then professionally collects the sanitation waste (about 12,000 tons each year) from the community by handcarts and trucks and then converts the waste at a centralized facility into valuable end-products such as organic fertilizer and insect-based animal feed, which is highly rich in proteins.

Buying into Sanergy’s business model which has been promoting an innovative approach to the circular economy in developing countries, including Kenya, the Japan International Cooperation Agency (JICA) made an equity investment worth $2.5 million in Sanergy’s  to enable it to provide more fertilizer for agriculture and insect protein for animal feed.

By supporting Sanergy’s sustainable and scalable operations, JICA has been able to achieve its mission of enhancing food security in Kenya, bearing in mind that population growth, urbanization and waste generation are correlated and the trio will always be on an upward trajectory.

Rwanda has roughly about 150,000 poultry farmers and several large animal feed manufacturers, all struggling with the costs and availability of proteins. The City of Kigali has the potential of bridging this gap through waste valorization borrowing from the examples of Kenya and South Africa. By converting the 600 tons of waste produced each day to animal feeds, farmers will enjoy a more nutritious source of protein which is 15% cheaper than other animal feed products in the markets. The City of Kigali can now structure better PPPs with the potential investors to bring this approach into life having understood the unique value proposition to them.  The country at large can follow these possible leads to tackle three challenges through one initiative; while supporting its National Strategy on Transformation 1 (NST1) economic agenda of going green.